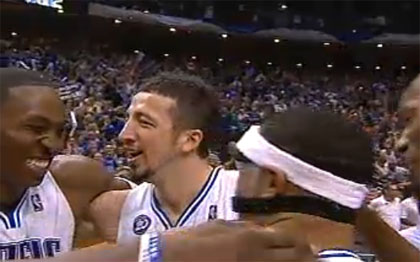 So here’s a runthrough:

There’s Rashard Lewis, who just scored 18 pts on 6/13 FGs and 8 rebounds. He spent 9 seasons in Seattle and its his 2nd year in Orlando. Then there’s Mickael Pietrus who just scored 14 pts on 5/10 FGs and an amazing 4/7 on 3s. I remember being totally impressed with the guy in Golden State, where he spent 5 years, before coming over to Orlando where it is his 1st year.

In the picture also is rookie Courtney Lee, who’s ok I guess. Yeah I’m not really all impressed, but he’s got 8.8 ppg and 1.7 assists. I’m not sure if he’s a starter, probably not.

And finally, NBA Defensive Player of the Year and probably the Playoffs MVP Dwight Howard, who redefines the phrase ‘monster on the boards’. 4 years pro, averaging 20 PPG and 15 RPG in the Playoffs. Barkley’s right, this is the sort of guy who can make the NBA redefine its rules for big men in the post with his dominating presence. The Shaq comparisons are righteous.

So why am I running through these guys names and stats? Because they just did this:

Tonight a tired looking LeBron James who looks exactly like a man with too much weight on his shoulders scored 26 pts on 8/20 FGs, with DeLonte West contributing 22 and Moe Williams 17. They fell short though, getting blown out on the road 90-103 to the rampaging Orlando Magic, which saw Howard scoring 40pts, consequently losing their hopes for a Finals appearance and ending their series 4-2.

Orlando will now go on to meet the LA Lakers to contest the 2008-09 NBA Championship, its first time to appear in the Finals since the Penny Hardaway – powered Magic got swept by the Olajuwon backed Rockets in 1995.

The Cavs have the best record in 2008-09 with 66-16. They have unrestricted Free Agents this coming season in Ilgauskas, Smith, Szczerbiak, Varejao and Wright, plus no Restricted free agents.

It certainly looks like its time to rebuild the post (which means trade for bigs), or find a better approach than ‘give it to LeBron’ (which means change the Coach). Moe Williams was a good addition to the front line for most of the season, but his contributions just weren’t enough in the Playoffs.

The Cavaliers play either drive – and – dish or screen and roll plays, but neither very often nor executed very well. After a LeBron or Moe screen and roll, there is hardly anyone else for a reliable drive or someone who shoots good jumpers. If they don’t decide to change the guards (and they shouldn’t), I predict they will be shopping for a reliable PF this coming season, someone who can attract a double team or create enough attention for himself to leave James or another shooter open. If they can get a good center, even better, although centers being the rarest resource to find in the NBA, I’d not count on it.

Obviously no one could’ve predicted this, but there it is. Ask me a week or two ago and I’d have told you it’d be crazy to think they’d not be in the Finals. But such is the way this game is played. Teams that execute well, remain true to their plays and make the most out of mismatches are teams that bring the Ws, while teams that do not make use of their weapons properly, if they have weapons at all, fall short. It’s not a matter of who has the best player, it’s a matter of who uses what they have most efficiently.

At the end of it all, after all the hype, the marketing, the song and dance, old – school basketball rules are still in effect. Orlando executed their basic, simple plan. Go to the big man, and if he’s cornered, send it to the outside shooters. It worked time and time again, so much and so often that their confidence grew, and now you’ve got players who need to be introduced (which is why I did the above), contesting the Finals next week. As the song says, ‘it’s amazing’, and it really really is – because it’s so simple. It’s amazing because the way it happened, it almost feels as if we knew this would happen all along, and when the final score was flashed on the screen, it seemed so right.

So next topic: who’s gonna take it all? Well, I dunno yet. One thing for sure though: 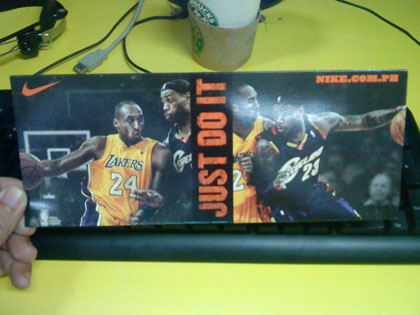